Home » About Us » Clergy 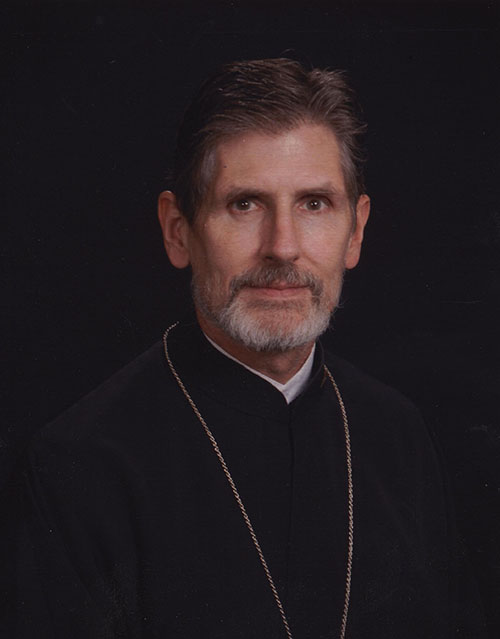 “And we know that all things work together for good

to them that love God, to them who are the called

Fr. Anthony Salzman has been the priest at St. Philothea Greek Orthodox Church since 1999.  He is also a Byzantine Iconographer, and as a priest with a "lay profession" continues his work painting churches and icons.  Father Anthony received his M.Div. in 1989 from Holy Cross Greek Orthodox School of Theology in Brookline, Massachusetts and then went on to study Byzantine Iconography in Greece.  He studied in the holy city of Thessaloniki for 6 years; apprenticing under master iconographer Kosta Photiadis and following classes in Byzantine Art History at the Aristotle University of Thessaloniki.  Icons he has painted can be found in churches in Connecticut, Massachusetts, Rhode Island, Pennsylvania, New Jersey, Ohio, Georgia, Florida, and Mexico City and in homes all over the United States.

He was appointed as the OCF Southeast Regional Director and is committed to the college ministry of our Holy Orthodox Faith.  Fr. Anthony began the "Workdaze" program at the Metropolis of Atlanta Diakonia Retreat Center where Orthodox college students enjoy a weekend retreat in exchange for service projects at the camp facility.  Workdaze started in 2004 and is still going strong!  He travels to Universities around the country presenting on Iconography: Art and Faith as an official OCF representative and in this way educates and inspires others about Christ and His Church.

Father Anthony currently serves as a consultant for the Metropolis of Atlanta Facilities Committee which reviews plans and programs for church beautification within the Metropolis.  He is a Visiting Lecturer at the Lamar Dodd School of Art at the University of Georgia, presenting on the theology of icons, drawing, color theory, egg tempera, and gold gilding.  Father is a long time member of the UGA CMA (College Ministers Association) and has served as president, vice president and secratary. Currently he collaborates with the National Day of Prayer Oconee County Committee and acts as host for this event which is held at our church annually.

Father Anthony is married to Christine (Paninos), M.T.S. and has two sons.  Stephanos is studying theology and sociology at the Aristotle University of Thessaloniki and Maximos studied and iconography at UGA.  Maximos is married and he and Anna and their two children are members of the our church.  Father and Presvytera own and operate Image and Likeness Iconography which offers icon greeting cards and gifts for the holy days of Easter and Christmas. Father Anthony has also developed a line of “WHIMAGES: whimsical images” which combine an expressionist modern art style with inspiring words of wisdom.  Please visit their website:  www.imageandlikeness.com and Facebook page:  Image and Likeness Iconography