This is a story outside of time.  Every generation has its own challenges and struggles and every generation faces them with more or less virtue.  The more virtue the greater the legacy.  Our current generation is no exception.  From a geo-political point of view there is strife and unrest around the globe.  Every where you turn you find conflict and struggle of one sort or another, politically, economically, religiously, even culturally.  It was like this in the early 16th century in Athens, Greece.  The Ottoman Empire had been ruling the Balkans for nearly two centuries, ever since the collapse of Constantinople in 1453.  The Greeks had been an occupied country for many generations when a young woman who we know as Philothea came along.  She was born with the name Revoula to parents known for their nobility and wealth.  Her parents urged her, against her will, to marry a nobleman of the city at a young age which she reluctantly did.  He turned out to be a cruel husband and beat her and belittled her.  Patiently she endured his mistreatment, always praying that God would correct him.  After three years her husband died and Revoula remained a young widow.  When she was 25 years old, her parents died and Revoula did what she always had in her heart to do, start a monastery.  She dedicated her extensive wealth to the establishment of a monastic community where she was installed as the Abbess or head of the community and was given the name Philothea which means “friend of God”.  She quickly became a leader of civic and social services, opening hostels and infirmaries to care for the poor, the sick and the elderly as well as shelters for the protection of women.  She also opened schools for the children of Athens and a vocational school for the young women of Athens so they could learn skills that would give them a future in an occupied country.  She seized the day as it were and rescued many around her from an otherwise miserable life. Her activities were censored by the non-Christian Ottoman authorities and she was threatened and tortured for her good works.  Ultimately she was killed for her relentless faith and exchanged "all earthly things for the everlasting life through great contest as a martyr."

Saint Philothea is celebrated on February 19

Apolytikion in the Fourth Tone
The famed city of Athens does honor Philothea, the righteous martyr whose relics it now reveres with faith.  For while living in sobriety and holiness, she has exchanged all earthly things for the everlasting life through great contest as a martyr.  And she entreateth the Savior to grant His mercy unto us.

Kontakion in the Fourth Tone
We all honour Philothei with jubilation of spirit, as this day we rev'rently worship her ven'rable relics. For she lived her whole life working kindness and mercy; and the righteous one, receiving a martyr's ending, is deemed worthy to entreat God that all be granted eternal life with the Saints. 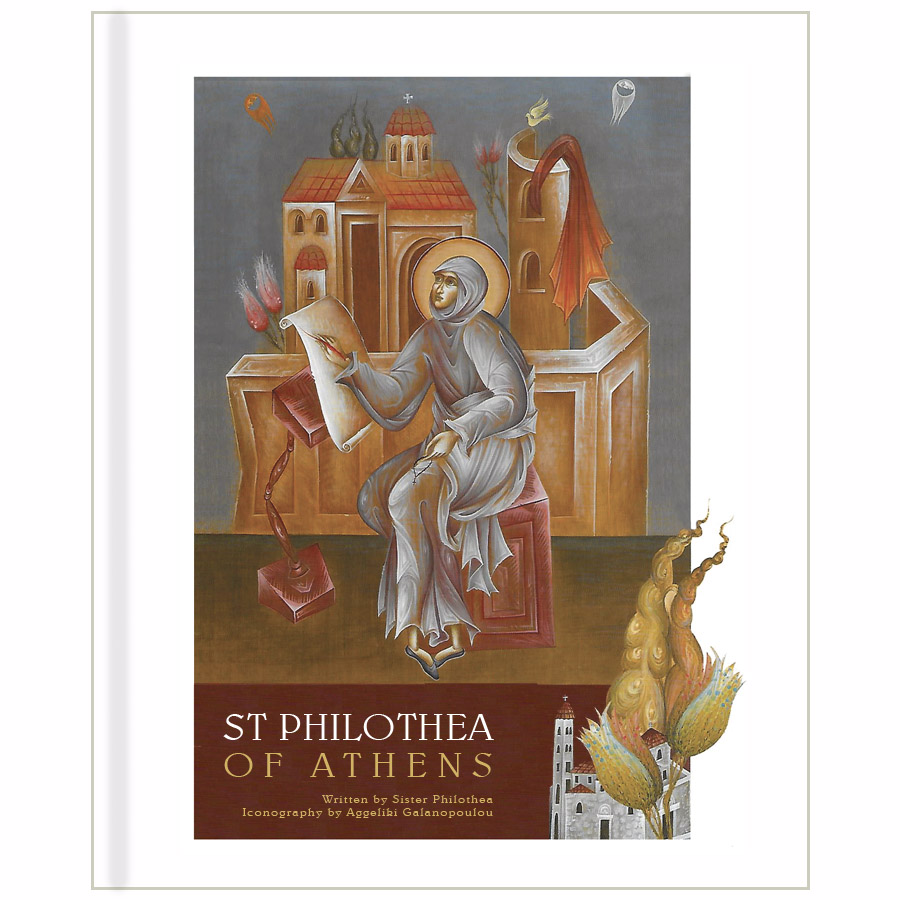 The Life of St. Philothea

The illustrated book to commemorate our 45th anniversary

This beautiful hardbound book about Philothea of Athens, Martyr Saint is a treasure that is filled with full color icons and illustrations in the Byzantine folk tradition.  Read about the dedication and sacrifice that our patron saint made under the harshest of conditions to bring light and life to the suffering around her.  $26 available at church bookstore or at www.imageandlikeness.com